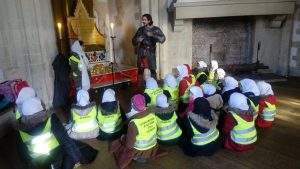 YEAR 4 & YEAR 5 visit the Tower of London as part of their History enrichment and heritage visit.

The pupils had a wonderful time and were able to explore the 1000 year old fortress built by William the conqueror in detail with guided learning sessions, looking at the Royal Beasts, site where two of Henry VIII wives were executed among others, exploring the Medieval Tower, looking at the line of Kings,  etc.

Year 4 attended the Tudor workshop in the Bower where they were able to try on medieval clothing, learn about the different fabrics and dyes of the time and the meaning behind the royal colours that were worn to show difference between the rich and poor.

Year 5 took part in a workshop in the Medieval Palace recreating the Norman Conquest.The students gained in depth understanding of  Saxon claimants to the throne prior to the Norman conquest The pupils re-enacted the battle of Hasting 1066 and learnt about the purpose of the white Tower as a castle and Palace to establish William the conquerors  power as well as the learn about how life changed in England thereafter. 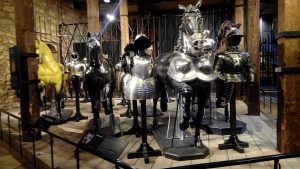 The Crown Jewels were a crowning glory for the pupils, the history and value of the world renowned Jewels Kohinoor Diamond, Cullin Diamond I and II , Black Prince Ruby were among  most priceless relics of the British Empire were seen. The Royal symbols relics and mantle worn during Queen Elizabeth II coronation ceremony were viewed and the pupils learnt about the symbolic meanings behind the Royal heritage emblems and processional objects ie the sword ,Orb, Scepter. The Pupils learnt the history and differences between the many royal crowns such as St Edward crown, worn only once at the time of coronation of any monarch and the other crowns such as the Imperial state crown, Consort crowns

This trip linked excellently with their History topics, Art (exploring architecture) and English (using language to hypothesising, imagining and exploring ideas through discussion)