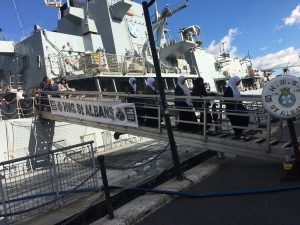 The event celebrated the exceptional work done by the female  officers and team at the Royal Navy. We were given a brief of the Royal Navy and the roles of women in the navy. Students took part in speed networking where they listened to life stories of courageous women and their time at the Navy. Thereafter we were given a tour of the warship which was quite interesting.

This event gave students a snapshot of the Royal Navy and  students an opportunity to talk to female ratings and officers about their careers, find out more about what life is like in the service whether they are a sailor, chef, medic, navigator or diver. They were also demonstrations around the warship of the diverse range of roles in the Royal Navy, fire fighting, engineering, navigation and damage control. Inshallah this event will then be followed up by a presentation from the students and a visit to the school by the Royal Navy officers.

We also celebrated women’s international week in our assembl​ies at school​. We spoke about the great inspirational women in Islam. Khadijah​ (RD)​, Ayesha ​(RD), Rufaida Al-Aslamia ​the first female surgeon in Islam,​ Al-Shifa bint Abduallah al Qurashiyah al-‘Adawiyah​ who​ had a strong presence in early Muslim history as she was one of the wise women of that time. She was literate at a time of illiteracy. She was involved in public administration and skilled in medicine.  Al-Shifa used to use a preventative treatment against ant bites and the Prophet approved of her method and requested her to train other Muslim women.​

Labana of Cordoba (Spain, ca. 10th century) was one of the few Islamic female mathematicians known by name. She was said to be well-versed in the exact sciences, and could solve the most complex geometrical and algebraic problems known in her time.

Her vast acquaintance with general literature obtained her the important employment of private secretary to the Umayyad Caliph of Islamic Spain, al-Hakam II.